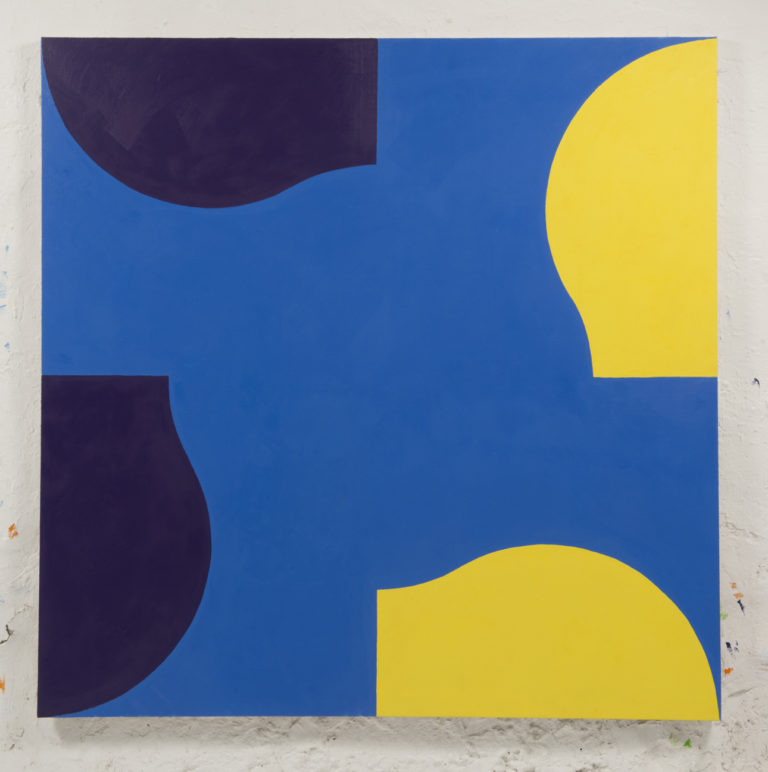 The exhibition is marked by a book funded by the Josef and Anni Albers Foundation with essays by Nicholas Fox Weber and Pierre-Alexis Dumas.

“The character KAN is an essential one in everyday Japanese and with a wide variety of meanings.
The fundamental meaning of KAN is space between, gap, interval, distance. However, it refers not only to space, but to time as well, meaning also pause, break, time between.

The title KAN refers to the new paintings after the KIN series in which the forms interlock to make a central sculptural figure.
So as not to repeat myself and to paint myself out of that corner I have floated the flat shapes outwards from the centre out to the edge of the support and beyond the picture plane.

I went to meet Richard Gorman and see his work in Milan earlier this year because a great friend asked me to. My friend and I share a profound love for the art of Josef Albers and Paul Klee, and, more importantly, have a tremendous rapport on issues of human values and family ties, but his taste sometimes sharply diverges from my own — which is to say, less tactfully, that some of the contemporary artists he appears to admire are, to me, lightweight designers more than real painters — so I was making what I thought of as a courtesy call mainly because I had been asked to. On the other hand, my friend knows me exceedingly well, and his insistence that I would like Richard and his paintings, and his adamancy about the rapport he was sure would occur, were convincing.

Now I am embarrassed. I should have had unequivocal faith in my friend, who is one of those few people who really sees things. I should have been aware of Richard Gorman’s art long ago; I cannot figure out why I was not. I am happy to have been set straight on both fronts, but am astonished by what I did not already know.

I have seen the work of hundreds of living artists, almost all of the ones touted in the marketplace today, in museums all over the world; how is it possible that, until earlier this year, I had never even heard of the painter who I consider to be among the half dozen or so greatest artists of our time?

Before that first visit, I had looked at Richard’s work only on a computer screen. I had imagined that it might be interesting in the flesh, because it reminded me of artists I like—Paul Feeley, Leon Polk Smith, Myron Stout, John McLaughlin; solid painters, visionaries of an earlier generation, no longer alive, joined by their ability to imbue simple forms and flat colors with richness and power—but I had no idea of what a difference it would make to engage with Richard’s actual paintings.

How could I know in advance that the reality of their lushly brushed surfaces and bold colors, and their scale which makes for such perfect encounters between them and the human beings meeting them, would take this completely original art into the stratosphere for me? (…)

Movement in form and colour, by Pierre-Alexis Dumas

Richard Gorman paints as he lives, with humility, rigour and sincerity.

His workshop, where he lives, is incredibly understated. His canvasses are hung on white walls, and his bed is tucked away above a little wooden structure which houses his kitchen. It is in other words monastic, and the first thing that one notices on entering the space is the harmonious and peaceful silence. Richard invites me to sit down and contemplate his art. We don’t speak, and I look at his work (we will speak much more afterwards in the neighbouring Sardinian restaurant).
Time must be taken over each canvas produced by Richard Gorman in order to fully understand  its impact.
Behind a simple and apparently austere facade hides an astute being with a mischievous eye. Richard has, above all else, geometrical compasses built into his brain.
He delights in playing with forms and colours.
Tirelessly, canvas after canvas, he recommences his assault on the square format. Simple geometric forms, a contrasting and inventive chromatic pallet, and an incredible way of applying colour with a devilish regularity and sharpness, are his only weapons.

The possible combinations of forms and colours seem infinite, but each composition is the fruit of a slow, meticulous, patiently reflected, deeply-felt and measured development. Certain forms which appear so simple on the surface, conceal several layers of colours experimented with before he was able to find the exact chromatic value that would balance the adjacent forms. It is a reclusive labour that stems from meditation and prayer, or simply the very human joy of creating beauty with an exemplary self-detachment. (…)

Richard Gorman grew up in Ireland and has lived and worked in Milan since the 1980s.
At that time, having abandoned the figurative residues of his first paintings, Gorman’s work became animated by the dynamic rhythm of a surface marked by lines slipping and sliding frantically across the canvass.

In the 1990s the role of lines retracted, leaving space to colour: ever since then his work draws its strength from the compositional tension created between irregular blocks of colour that become increasingly prominent and simplified and, over time, turn into his principal form of creative research. His extended and frequent travels to Japan have significantly influenced his working method and choice of materials. A clear example of this are his large scale paintings on hand made washi paper, undertaken in the far east of Japan in 1999, 2003, 2008, 2015 and 2017.

Gorman has shown his work regularly worldwide since the mid 1980s at the Kerlin Gallery in Dublin, as well as in London, Milan and Tokyo.

In 2014, Gorman became the first Irish artist to design a carré scarf for Maison Hermès. His drawings were used for the men’s Autumn/Winter 2015 collection and are displayed in the iconic Japanese Hermès department store in Isetan, Shinjuku, Tokyo. 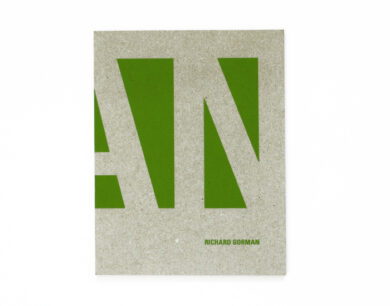 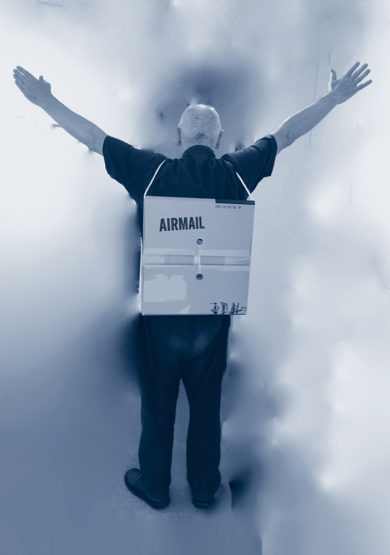 a project by Richard Gorman
April-May 2016