a project curated by Antoni Malinowski
in dialogue with Jenni Lomax

a project curated by Antoni Malinowski
in dialogue with Jenni Lomax 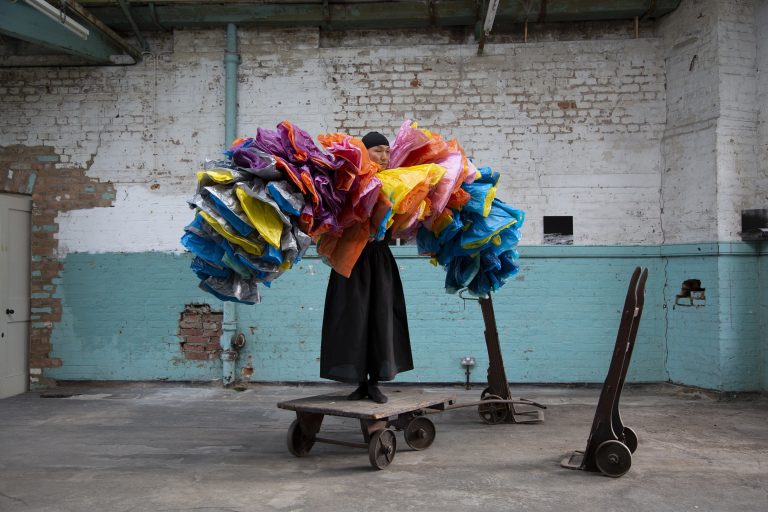 Following the darkness of London’s lockdown the Ragged Art group of artists took an initiative to overcome the gloom by focusing on light and wonder. They therefore decided to present in a new form the initial show of art installations, wall painting, photographs, films and performances that took place at the Ragged School Museum in the East End of London. What united the diverse art pieces was the faith in the power of imagination as a tool of transformation.

At Assab One they are presenting Antidoti / Antidotes, an evening of art performances, film projections and an art accrochage; an evocative echo of the Ragged School Museum’s event.

Hélène Binet is a Swiss and French internationally acclaimed photographer based in London. She studied photography at the Istituto Europeo di Design in Rome, the city in which she spent most of her formative years. Over a period of more than 35 years Binet has captured both contemporary and historic architecture. She is a fervent advocate of analogue photography, working exclusively with film, and a firm believer that ‘the soul of photography is its relationship with the instant’.
Binet’s work has been exhibited in both national and international exhibitions, including a solo exhibition at the Power Station of Art, Shanghai, in 2019. She was made an Honorary Fellow of the Royal Institute of British Architects in 2007 and in 2015 was the recipient of the Julius Shulman Institute Excellence in Photography Award. She was also the recipient of the 2019 Ada Louise Huxtable Prize, awarded to a woman who has made a major contribution to architecture, and is one of the Royal Photographic Society’s Hundred Heroines. www.helenebinet.com

Studied architecture in South Korea, scenography at the Brera Academy of Fine Art, Milan and dance at the Civica Scuola di Teatro Paolo Grassi in Milan. Then he moved to Venice to work with Carolyn Carson at the Academia I’sola Danza and as an independent dancer at the Centro Teatrale di Ricerca Venezia. Since 2005, he has been living and working in London realising projects in the UK, Europe and South Korea. During 2014 he was artist/choreographer in residence at Asia House London. www.ymcho.co.uk

Alexandre da Cunha is a Brazilian-born artist who lives and works in São Paulo and London. He has referred to his practice as ‘pointing’ as opposed to ‘making’. By ‘pointing’ at existing objects in plain sight, da Cunha highlights new and unexpected meanings within the objects he chooses. This approach allows him to disentangle preconceptions and instinctive responses inherent to particular objects, restoring them with alternative modes of viewing and understanding. Given their renewed possibility, da Cunha’s sculptures inspire lush potential, illuminating everyday encounters with these ordinary materials. For instance, household cleaning objects suddenly conjure spiritual significance, while seemingly mundane industrial ready-mades echo art historical precedents.

Lily Grimes is a London based Cinematographer coming from international news and documentary. Since graduating the Cinematography MA at NFTS , Grimes has shot TV drama, shorts, films with performance artists, documentary, and some amazing music videos. Lily Grimes won an RTS award in 2020 and was runner up BSC Emerging Cinematographer 2019.

Oona Grimes is a London based artist, primarily a chaser of language through drawing, clay making & film.
During Grimes’ 2018 Bridget Riley Fellowship at The British School at Rome she segued from thieving Lorenzetti tartans and cartoon detail from Etruscan paintings, to the appropriation of neorealist films – mis-remembered, imitated and low tech re- enacted: a physical drawing of herself captured on i-phone. Oona Grimes’ artworks are featured in preminent public collections such as British Library, London UK and V & A Museum, London UK. www.oonagrimes.co

Jefford Horrigan lives and works in London. He makes performances and short films rooted in sculpture. In these works furniture and household objects are moved and manipulated until they take on a different entity. As well as honoring the usual working out, planning and thinking roles his drawing are often employed as a way for substituting text to make performance proposals.

“I make installations, short performances and small films, rooted in sculpture and jealous of painting – particularly the still life. In these works I move, manipulate and sometimes dance with furniture, combined with everyday actions such as polishing shoes, washing up or sewing. I want always to have the furniture, household objects and actions remain recognizable and everyday but the emotional atmosphere altered.”

Liliane Lijn is a New-York born visual artist. Liliane Lijn’s work covers a large spectrum of interests, from Light and its interaction with diverse new materials to the development of a fresh image for the feminine. Lijn has taken inspiration from incidental details both man-made and natural, mythology and poetry, science and technology. Lijn is interested in the development of language, collaborating across disciplines and making art that is interactive, in which the viewer can actively participate. www.lilianelijn.com

Katrina Palmer lives and works in London. She works with stories that are distributed across found sites, audio environments, printed matter and performance. Attentive to uncertainties, bodily vulnerabilities and insecure environments, these situated narratives invite the audience to consider objects that are indicated, but not fully present. The articulated exploration of material circumstances locates sculpture in narrative. www.katrinapalmerartist.com

Sarah Taylor trained as a dancer in Melbourne at the Australian Ballet School and graduated from the Académie de Danse Classique Princesse Grace de Monte-Carlo. She was a maître de ballet for the ballet ensemble of the Teatro Verdi in Trieste, for the Ensemble of Micha van Hoecke, for Komische Oper Berlin and Balletto di Toscana. She was also a lecturer for Deutsche Oper Berlin and Arena di Verona, where she was also the assistant of the choreographer Fabrizio Monteverde for the preparation of the ballet “La Tempesta”. From 1998 to 2009 she was a teacher and assistant for Gelabert Azzopardi Dance Company. He has also collaborated with the Graz University of Technology and with the electronic music department of the “G. Tartini “from Trieste. Since 2010 he has collaborated with the company of the Ballet of Rome as a dance master maitre de ballet and repeating assistant guest choreographer.

Working in the fields of visual art and art education, Jenni Lomax was the Director of Camden Arts Centre, London, from 1990 to 2017, where she established an influential and forward-thinking programme of international exhibitions, artists residencies and education projects, all of which have artists and their ideas at the core. She was awarded the Order of the Polar Star in 2017, Chevalier dans l’ordre des Arts et des Lettres in 2007 and received an OBE for her services to the Visual Arts in 2009.
Before Camden Arts Centre, Jenni developed and headed up the Community Education and Public Programmes at the Whitechapel Art Gallery for 10 years through the 1980’s. Throughout her career she has been closely involved in projects that champion and support artists and art education at all levels. She is currently working independently on a range of curatorial, writing and archival projects.

After studying painting at the Academy of Fine Arts in Warsaw and furthering his studies at the Chelsea College of Art, Antoni has established and based his practice in London. Following his solo exhibition at the Camden Arts Centre in 1997 Malinowski spent several months in Rome researching the ancient wall paintings. This triggered many collaborations with architects on permanent interventions ranging from engineering colour for facades to complex wall paintings. They include Vermilion Wall Painting at the Royal Court Theatre, collaboration with Haworth Tompkins Architects; wall painting at the Luxor Theatre, Rotterdam, collaboration with Bolles+Wilson Architects; Venetian glass for the elevation on Maddox Street, London, collaboration with Eric Parry Architects. In 2013 he has completed ceiling paintings at the new Everyman Theatre, Liverpool designed by Haworth Tompkins – this won the 2014 Stirling Prize. Last year he completed a large commission for the foyer areas at the Rafael Viñoly designed Mathematical Institute, Oxford: Spectral flip, a two part mural painted directly onto the south and the north facing walls, seemingly creating a luminous force field between them. His paintings have been exhibited internationally and are in many private and public collections including Tate, London. www.antonimalinowski.co.uk 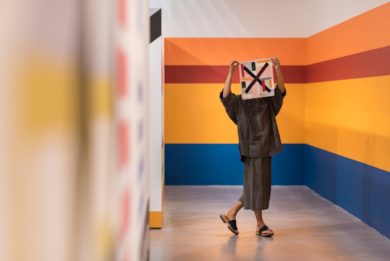 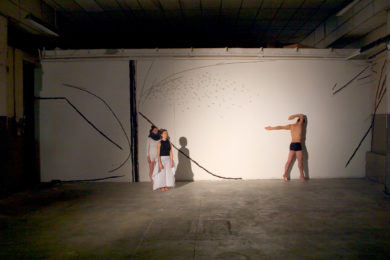 a wall drawing and a performance 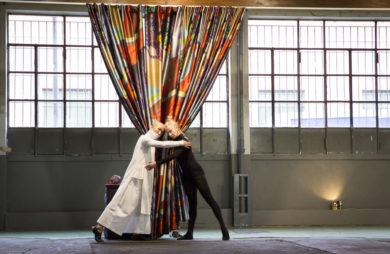