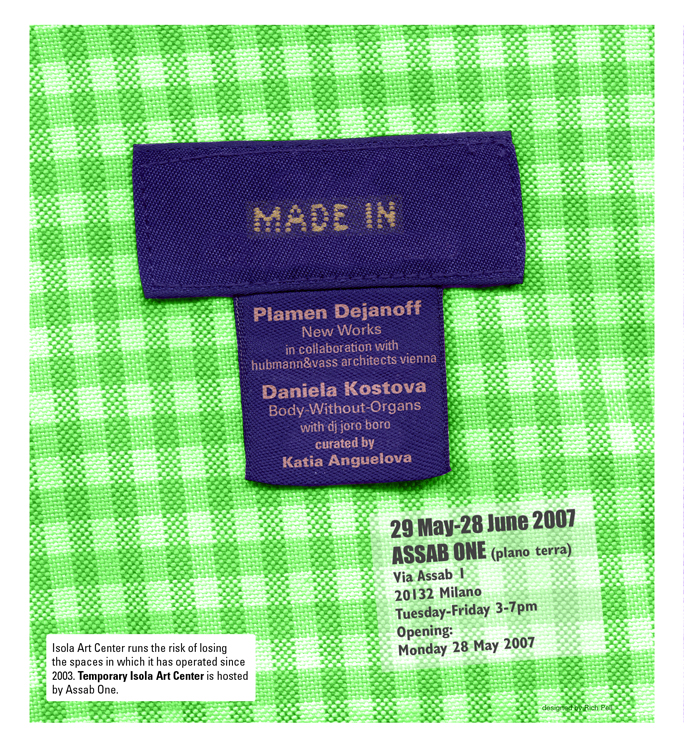 Isola Art Center runs the risk of losing the spaces in which it has operated since 2003, and no suitable alternative space in which to continue its activity has been proposed. Temporary Isola Art Center is hosted by AssabOne, an exhibition space founded by Elena Quarestani that produces and promotes cultural and art projects. Isola Art Center has worked with 1500 square meters of exhibition space on the second floor of the industrial building known as the “Stecca degli Artigiani”, owned by the city.

For this event Katia Anguelova has invited  Daniela Kostova and Plamen Dejanoff –residents of NY, USA and Vienna, Austria respectively. The two artists share a common Bulgarian origin that also acts as a starting point for their projects.

Plamen Dejanoff’s project originates from the relationships between art, culture and economy, issues that the artist has been investigating for some years now. In Planets of Comparison Dejanoff explores the relations between the systems of art and of economy.  Here he acts simultaneously as  artist, manager and collector.

In the nineties Dejanoff bought seven houses in Veliko Tarnovo (a city in the centre of Bulgaria) to be restructured by Plamen Dejanoff in collaboration with a number of architecture studies (Kühn/Malvezzi, Vienna, Berlin, Grüntuch & Ernst Berlin, Gruppo A12 Milano, Cocktail Lyon) and afterwards used by institutions, galleries and museums for cultures activities. The project started with MUMOK, the Museum of Modern Art Ludwig Foundation Vienna, where a bronze statue representing a part of the first realised house was exhibited in the spring of 2006 (the project was realised by Plamen Dejanoff with the Austian architects Wiederin/Konzett and Hubmann &Vass). The project will then move to Veliko Tarnovo where MUMOK will be establishing a space in the Balkans for the next years. Plamen combines strategies of art and business in a similar way to how  Andy Warhol combined Pop and Conceptual Art. For this exhibition Plamen Dejanoff presents a new phases of the project on MUMOK house in Veliko Tarnovo, designed together with architects Erich Hubmann & Andreas Vass from Vienna, featuring drawings, maquettes, and a new objects branded ‘dejanoff’ that are actually realised in collaboration with bulgarian craftmens and “made in Bulgaria”. This project, playful and economically rewarding at the same time, transforms the existential experience into a sort of joint venture which is typical in the real economy, thus continuing his investigation into art and economy.

Daniela Kostova uses her documentary video, Body-Without-Organs, as raw material for an installation, especially designed originally for Isola Art Centre, composed of a series of ‘social environments’. The passage through the installation invites viewers to  reflect on the issues of emigration, travelling and music as a point of integration. The title of the work borrows the concept of “body-without-organs” from Gilles Deleuze. The expression “le corps sans organs” may seem obscure, but its definition is quite clear. It means conceptualizing the body without reducing it to an organic form, not a body deprived of the organs, instead a body on its way to differentiation. The body without organs is therefore in-organic life and, as such, a power of individualization not yet turned into an organism. The exhibition becomes a means for cultural dialogue and confrontation between geographical places that are different yet near. Inspired by the New York music scene of ethno-mesh and gypsy-punk the installation describes the Bulgarian Bar ironically named the Bulgarian Cultural Centre in New York City seen through the eyes of those recently emigrated there. Bulgarian Bar is not a “cultural center” but rather a cultural imaginary and an area of converging opposite tendencies: on one hand the institutional representation of the National Cultural Center and on the other the essence of the nomad spirit expressed through the gypsy-punk music.

Dancing in the Bulgarian Bar transcends the usual bodily function, overiding it with new possible meanings provided by the orgasmic fusion with music. The experience in the Bulgarian Bar becomes an anthropological metaphor that shows plurality of culture. The work of Daniela Kostova becomes the search of one’s self in the human community, where spiritual values are the consequence of collective adventures. It is not by chance that DJ Boro says  of gypsy music – “the gypsy idea works very well, because they don’t have a state. They are continuously nomadic”.

In short, the party depends on the people’s possibilities and on their capacity to forget their own identities.