OPENING HOURS
From September 4 to October 16
Wednesday to Friday from 15:00 to 19:00, Saturday by appointment

SPECIAL OPENING
During the Salone del Mobile the exhibition is open Monday 6, Tuesday 7 and Saturday 11 September from 15:00 to 19:00

Claudia Losi continues the embroidery of lichens on the work ‘Arazzo’.

“And yet relation appears,
A small relation expanding like the shade
Of a cloud on sand, a shape on the side of a hill.”
Wallace Stevens, Connoisseur of Chaos

The landscape, which contains me, is a network of growing stains that move on the earth’s surface. It is an entity of surface and surface between one and the other, between stain and stain, twines grow; and between the interweave the void. Not a void of nothing, but a dynamic principle, a non-full space, the place for excellence where metamorphoses take place. Only in this way the stains do not oppose each other, but grow into a relationship. And only within a reciprocal relationship do the stains on the surface grow deeper.

Claudia Losi (b. 1971, Piacenza) explores social interactions, twists of human sensibility and complexity of natural phenomena with a multidisciplinary approach where philosophy and literature are combined with science, sociology and anthropology. Losi’s practice includes participatory objects and performances as well as drawing, photography and sculpture.

“And yet relation appears, a small relation expanding like the shade of a cloud on sand, a shape on the side of a hill.”  Wallace Stevens, Connoisseur of Chaos

“If the lichen is the “map” on which to read, on its front and on its back, the movements of growth and relationship, the small universes/curtains, in dense, milky and semitransparent fabric, welcome those who enter, from below and they separate it, creating an intimate space, in a partial relationship. They allow us to look, to see and to be seen partially, like foggy traces. Relationships, landscapes of mobile relations. The chapel that appears suspended, the white curtains that welcome flowers, candles and sacred images, creating a religious space, but not precisely divided by the context as sounds/ prayers, songs and dances can be heard/seen”  Maya Deren, Divine Horsemen: The Living Gods of Haiti, 1947 of The divine horsemen of Voodoo, published by Il Saggiatore, 1959

“We should have got into the habit of moving long ago, of moving freely, without causing trouble. But we haven’t: we stayed where we were; things stayed as they were. We didn’t ask ourselves why this place and not elsewhere, why it was like this and not otherwise. Then, obviously, it was too late. Our habits were solidified. We began to believe that we were fine where we were.”
George Perec, Species of Spaces, 1974
* This quote by Perec is more relevant than ever after what we have been through, making a cannon in relation to the relationships we have been forced to change through our spaces. (C.L.) 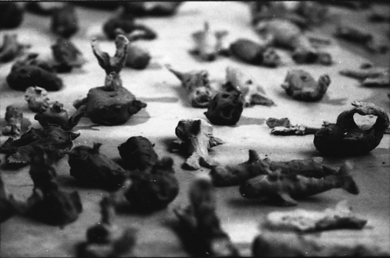