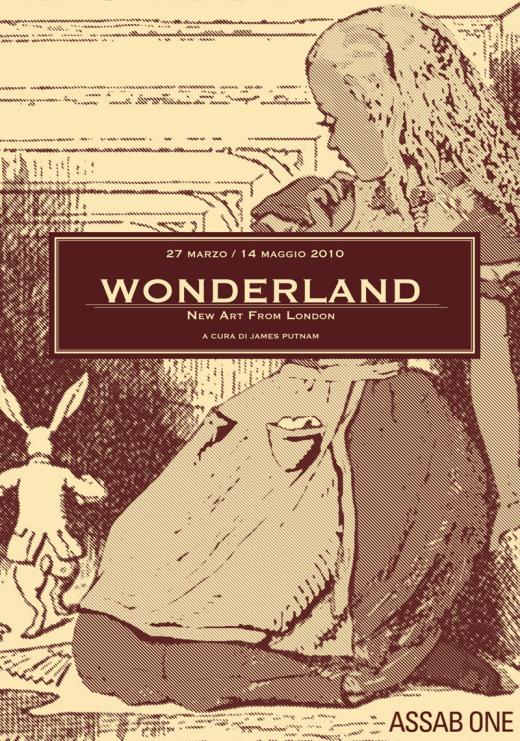 WITH THE SUPPORT OF
British Council

As the title suggests this show is intended to evoke a magical realm that proclaims a universe of fertile imaginative possibilities. Nowadays wonderment tends to be more narrowly associated with childhood and it has become an increasingly remote experience in our era of relentless advancements in science and technology. Yet in the field of visual art there is still a great capacity for wonder, which is one of the most fundamental aspects of aesthetic experience. It relates to the powers of thought, feeling, imagination and creativity. But perhaps most significantly wonderment generates an enlarged perception, a freshness of feeling and a general aura of optimism.

This diverse selection of new art from London includes painting, drawing, printmaking, photography, collage, sculpture, installation, photography and video. Much of this displays an emerging new tendency in artistic practice with a return to more traditional artistic virtuosity, and attention to detail matched by an emphasis on process with a strong conceptual edge. While artists of the previous generation were frequently preoccupied with their own existence these artists tend to produce work rooted in more universal subject matter. Their practice frequently involves in depth research into history, science, natural history and futurology. Also, instead of their input being just conceptual with the work fabricated by someone else, many of them show practical skills and are directly involved in the actual production.

Wonderland is characterized by an overall sense of hybridity, where notions of miraculous scale incorporate elements of nature and  technology and intriguing scientific principles.

Alice Anderson graduated from L’Ecole des Beaux-Arts, Paris and Goldsmiths College, London. She works from film to drawing and sculpture, playing with dislocation of time as children construct parallels worlds. Her work is a compulsive and obsessional production through which she explores and gives shape to her childhood memories. www.alice-anderson.org

Sam Buxton graduated from the Royal Academy of Arts in 1999. His work is characterized by complex ensembles of miniature etched stainless steel architectural sculptures. He is concerned with the interface between the living body and the built environment, breaking down boundaries between design, science and art. www.sambuxton.com

Oliver Clegg received his MA at City and Guilds London Art School in 2005. His principal medium is painting and printmaking but he also creates sculptural installations. His characteristic paintings on old drawing boards, often depict haunting, lonely portraits of abandoned and disarrayed toys in stark and unsettling scenes. He had a critically acclaimed solo exhibition at the Freud Museum (London, 2008), which explored the notion of play and childhood memory. www.oliverclegg.com

Shezad Dawood received his MA from the Royal College of Art, London in 2000. His multi-media works build up a bizarre and complex dialogue of subversive parallels between diverse value-systems and artistic practices.  The work playfully but critically questions our traditional assumptions about the nature and role of art in contemporary consumer society. www.shezaddawood.com

Tom Gallant examines the pathologies underlying the West’s continuing fascination with pornography and collector culture. His interests in Victorian decorative craft and his training in the traditional far-eastern techniques of Kirigami and Origami conjoin in his works in which highly intricate and beautiful shapes are cut and folded from pages extracted from pornographic magazines. www.tom-gallant.com

Stephane Graff works with photography, painting and installation in his project Professore, an alter ego blurring the distinctions between fact and fiction. Professore challenges perceptions of identity and social order, whilst raising issues regarding society’s innate trust in science and institutions. His unconventional science can range from the fantastic to the banal, but it is always treated with equal reverence and ironically comes across as plausible.

Henry Hudson graduated from Central St Martin’s College of Art and Design in 2005. Primarily a painter he often combines paint with the unusual medium of plasticine and his expressive style is inspired by the caricatured tradition of William Hogarth. His subject matter frequently relates to London and the real detritus of the city and the tarnished reverberations of modern-day society. www.henry-hudson.com

Bridget Hugo. Her work is concerned with how art can perform critical functions without relying on discourse which she feels can be limiting. This has led her to practice outside the conventional institutions of art to test whether the art object can be politically and culturally relevant while holding its own as an integrated part of a more social/public landscape. She created the critically acclaimed installation/bar improvised from found objects for the Distortion exhibition at the 53rd Venice Biennale.

Alastair Mackie completed his M.A. at City and Guilds London Art School (2000). His work, usually in sculptural form is often concerned with the cycle of birth, death, regeneration and the conflicts that occur within nature and mankind. His thought provoking works are the result of a complex and time consuming construction processes, using unusual natural materials that tend to highlight the contradiction between nature’s beauty and harshness. www.alastairmackie.com

Polly Morgan uses her skill as a taxidermist to create intricate imaginative sculptural works and tableaux. Unlike conventional taxidermy displays she subverts the traditional goal of mimicking the natural habitats of animals, instead placing them in less expected, unnatural contexts often combining and juxtaposing them with diverse found objects. www.pollymorgan.co.uk

Boo Saville graduated from the Slade School of Fine Art BA in 2004. Saville is known primarily for her detailed Biro pen drawings and her subject matter often focuses on the decomposition of the body after death. Yet she manages to extract a kind of beauty from the macabre by exploring shapes, textures and surfaces.

Martin Sexton works at the interface of ancient history, metaphysics, the psychosocial aspects of ufology and the politics of aesthetics – all countered with an overpowering poetic vision. His art is heavy with myth and inherent narrative and his mediums include ice, fire, meteorites, sound, film and text. He refers to his practice as ‘writing’ and his work as ‘sculptural poems’.

Jamie Shovlin graduated from the Royal College of Art, London in 2003. He is interested in the tension between truth and fiction, reality and invention, history and memory. His projects combine his facility as a draughtsman, printmaker, painter and writer with conceptual complexity and playfulness. Shovlin questions how information becomes authoritative and explores the way we map and classify the world in order to understand it.

Hugo Wilson studied painting in Florence and had a successful career as portrait painter prior to completing his MA at the City and Guilds, London in 2008. Wilson’s subsequent conceptual work has been concerned with exploring organizing systems, scientific principles and genetics. Fascinated by a Victorian sense of wonder, he often borrows from the aesthetic of the era, often incorporating obsolete media and technologies. www.hugowilson.com

James Putnam is an independent curator and writer. He founded and was curator of the British Museum’s Contemporary Arts and Cultures Programme from 1999 to 2003. He was also a former curator of the British Museum’s Department of Egyptian Antiquities (1985 –1998). In 1994 he conceived and curated the groundbreaking exhibition, Time Machine which involved juxtaposing works by contemporary artists with ancient sculpture in the British Museum’s Egyptian Gallery. He also organized a different version of Time Machine at the Museo Egizio, Turin in 1995. His book Art and Artifact – The Museum as Medium, published by Thames & Hudson in 2000, surveys the interaction between contemporary artists and the museum. He has curated an ongoing series of critically acclaimed projects with contemporary artists at the Freud Museum, London that have included Sophie Calle, Sarah Lucas, Ellen Gallagher, Tim Noble and Sue Webster. He has also curated exhibitions at the Petrie Museum, University College London and was Associate Curator at the Bowes Museum, County Durham from 2004 to 2006. He was appointed curator of Arte all’Arte 9, in Tuscany in 2005 and was on the curatorial committee for the 2006 Echigo Tsumari Triennial, Japan. He is currently a curator for the Busan Biennale, S.Korea, 2010. He was Visiting Scholar in Museum Studies at New York University from 2003-2004 and since 2004 has been lecturer in Curatorial Studies at Central Saint Martins, University of the Arts, London. In 2009 he curated the critically acclaimed exhibitions Distortion and Library as collateral events of the 53rd Venice Biennale. www.jamesputnam.org.uk