Launch of the book by Giovanni Caccavale Istituto di Traduzione 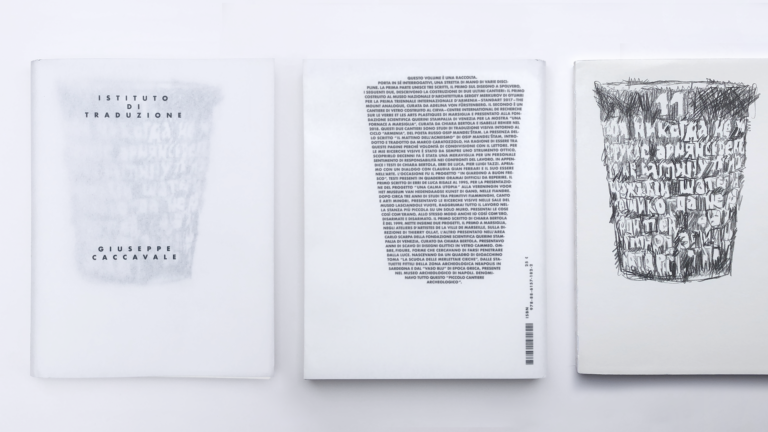 Free admission with Assab One 2022/2023 card (€10).
Reservations are recommended at info@assab-one.org

At the presence of the artist, in dialogue with Chiara Bertola and Adelina von Fûrstenberg

The book, conceived by the artist with the designer Odilon Coutarel, is based on one of the artist’s emblematic goblets. It’s silhouette first appears on the cover, then the construction is detailed on the first pages.  The location of this gobelet determines the layout of the whole book and its silhouette reappears on the back cover. The stitched binding of the inner block is visible under the 160g pergamanta cover. When the book is pressed, the Cyrillic characters of the gobelet can be read through the paper. The book , offset printed by Alfa Grafica, includes facsimiles of the translator’s worksheets and a selection of Osip’s poems translated in Italian/Russian.

Giuseppe Caccavale teaches “art mural poétique des espaces “and drawing at the Ecole Nationale Supérieure des Arts Décoratifs in Paris. A visual translator of poetic texts and a scholar of the minor arts, has made several journeys to Mount Athos. His projects in galleries and museums where spaces are transformed into construction sites alternate with urban redevelopment interventions. A worksite took place at MAXXI in Rome in 2002. In 2015 he participated in the exhibition curated by Vincenzo Trione in the Italian Pavilion for the Venice Biennale and, in 2017, in the first Triennale of Armenia curated by Adelina von Fürstenberg. In 2016, he created, together with composer Stefano Gervasoni, the ” Avenue of Songs ” in the entrance boulevard of the Italian Cultural Institute in Paris. The “Projet Paul Celan” at the École des Arts Deco and the École Normale Supérieure, in Paris with a team of students, dates back to 2020 ; the redevelopment project at the Henri Poincaré Institute in Paris to 2022. Various are his projects alongside Chiara Bertola, the latest “Un’ evidenza Fantascientifica ” co-curator Andrea Cortellessa, at the Fondazione Querini Stampalia in Venice in 2021. Between 2019 and 2022, in Tunisia, at the invitation of Fondation Rambourg, he created a monumental mosaic, a luminous dialogue with mosaicist Abderrazak Belgacem of El Jem. Giuseppe Caccavale collaborates regularly with CIRVA, Centre Internationale de Recherche sur le Verre in Marseille.

Chiara Bertola curator of the contemporary art project “Conserving the Future” for Fondazione Querini Stampalia in Venice, was artistic director of Hangar Bicocca in Milan from 2009 to 2012 (her exhibition Terre vulnerabili was memorable), and president of the Fondazione Bevilacqua La Masa in Venice from 1996 to 1998. In 2008 she was among the curators of the XV Quadriennale in Rome. She has published with Mondadori/Electa Curare l’arte, while Un lungo cammino lungo la cura dell’arte and Conservare il futuro are being published.

Adelina Cüberyan von Fürstenberg is the founder of ART For The World, an NGO affiliated with the United Nations that has been working in the field of contemporary art since 1996. Among the first to show an interest in non-Western artists, she pioneered a multicultural approach to contemporary art. A Golden Lion winner for the Pavilion of Armenia at the 56. Venice Biennale in 2015, Adelina founded and directed the Center for Contemporary Art in Geneva, Switzerland and the Magasin in Grenoble and its School of Curators. She has just completed the production of Interaction, the fourth film made by Art for the world, which was presented at the Rome Film Festival and will be shown these very days in Milan at the Anteo cinema.

Dante & Descartes, the historic independent bookstore in the heart of Naples founded in 1984 by publisher Raimondo di Maio, started its editorial activity in 1988 by publishing the book Croce bibliofilo by Dora Marra, secretary of Benedetto Croce. Its authors include Erri De Luca, poet Chandra Livia Candiani and Louise Glück, the 2020 Nobel laureate in literature.