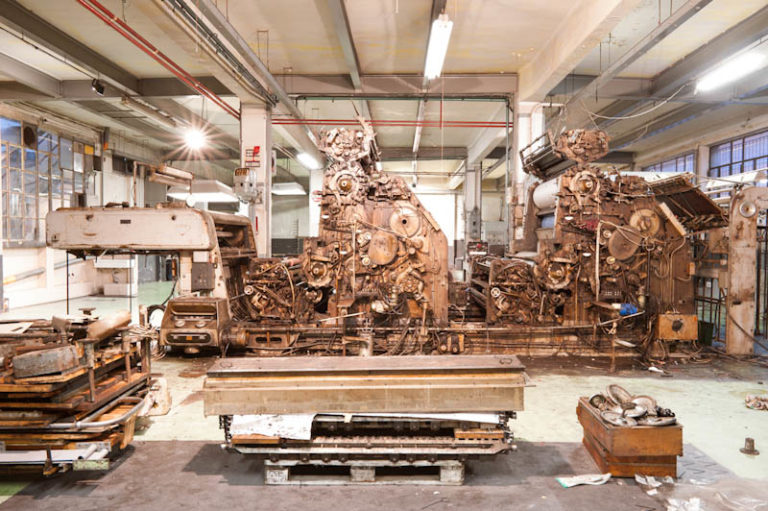 On the 2nd of February 2012 Roland Ultra, the massive printing press that for 10 years had been the centre of Assab One’s activities, left Milan to embark on a journey to India and the promise of a new life. After 30 years of faithful service in the world of books, followed by a decade of stillness as a sort of monument, Roland Ultra began its odyssey towards the unexpected opportunity of resuming the work for which it was built.

The Journey of Roland Ultra is being followed and documented through a number of projects, among which a photographic project by Giovanni Hänninen and a book of drawings by Nathalie Du Pasquier.  Many friends and supporters have been following Roland Ultra’s adventures on the Assab One website.

Roland Ultra RVU7 is a 4-colour sheetfed printing press that was produced from 1967 to 1981. Our hero’s serial number is 22334, series 414, its weight 43,000 kg. Roland reached Milan from Germany in 1969. For over 30 years it printed art books for a well-known company, GEA, Grafiche Editoriali Ambrosiane. After the company closed, Roland Ultra was the only machine that remained in the complex that currently hosts Assab One. During the 10 years when it was a part of Assab One, Roland witnessed – and occasionally took part in – exhibitions, performances and installations.

The story of the company that used to produce Roland Ultra starts in 1845, when Carl August Reichenbach from Augsburger Druckmaschinenbau delivers the first automatic cylinder press to Nikolaus Hartmann’s printing plant in Augsburg. In 1911 the first Roland sheetfed offset press was built. The company, currently named ManRoland due to a merger in 1979, is based in Offenbach, and is still a leader in the production of sheetfed printing presses. Manroland Sheetfed GmbH is 100% owned by British industrialist Tony Langley, the long-term and strategic investor behind the takeover of the Offenbach sheetfed division together with its 40 subsidiaries, and owner of private engineering group, Langley Holdings plc.

The deal: at the end of 2011, Bharatkumar Gohel e Chinubhai Patel, two Indian gentlemen and businessmen, came to Assab One to inspect Roland Ultra, which they had come across through an Internet search. Bharat and Chinubhay proposal to take Roland to India was accepted only once it was established that the printing machine would once more be put to work, with the understanding that its journey would be monitored until it reached its destination.

Manmad, a city of 72,412 inhabitants in Maharashtra, was the final destination of Roland Ultra’s journey. Starpackers, the cardboard box factory where Roland Ultra has began its new life, is located here.

The production of the exhibition has been partially supported by the many friends who took part in the fundraising game 100 photos for 100 friends, launched in December 2012 and still in progress.
www.ilviaggiodiroland.org

This exhibition would not have been possible without the collaboration of Bharatkumar T. Gohel and Chinubhai Patel from Som International Inc, exporters and importers of Graphic Arts Machinery. We would also like to thank the Khan family, owners of Starpackers, the box factory where Roland Ultra has been put back to work.

Special thanks to Amedeo Martegani, for the gift of his listening and precious advices.

Giovanni Hänninen lives and works between Milan and Rome. He holds a PhD in aerospace engineering and works for Milan Polytechnic. His photography centres on critical aspects in today’s relationship between people and architecture. His most recent project, cittàinattesa, was presented by Gabriele Basilico in Casa Testori. In Assab One he displayed two solo exhibitions: Milano Downtown and Rendering the City.
www.hanninen.it

Nathalie du Pasquier was born in Bordeaux and she has lived in Milan since 1979. Until 1986 she worked as a designer and was a founder member of Memphis. In 1987 painting became her main activity, and she practises it with generosity and joy.  Assab One has hosted two solo shows by Nathalie: Quadri a motore and Ensemble. For Assab One she also produced Buzz Box, a project in partnership with Steve Piccolo.
www.nathaliedupasquier.com

Luca Pancrazzi lives and works between Milano and Pieve a Presciano, a small town in Tuscany, better known as La Filanda in the world of contemporary art (www.madeinfilandia.org). A militant artist, meaning he never stops to be so even when cooking, Luca likes to call himself a painter despite using many different media including technological ones. Luca has a special connection with Roland Ultra  being the last person who put it in motion when he printed his work Polvere contemporanea in 2002. Assab One has presented his works in two exhibitions curated by Elio Grazioli, La polvere nell’arte and Collezionismi and gave shelter to his colossal Maseratirundum for several months.

Steve Piccolo is an artist and a musician. In addition to pursuing his own research, since he moved from New York to Milan in the nineties, Steve collaborates with several Italian artists and musicians bridging the Italian and the New York art scene. Assab One hosted in 2002 his performance Polvere Contemporanea (CMYK) Quartetto per tecnologia obsoleta e fuori registro with Luca Pancrazzi, Gak Sato, Luca Gemma. He also carried out the project Buzz Box in partnership with Nathalie du Pasquier.
www.stevepiccolo.undo.net