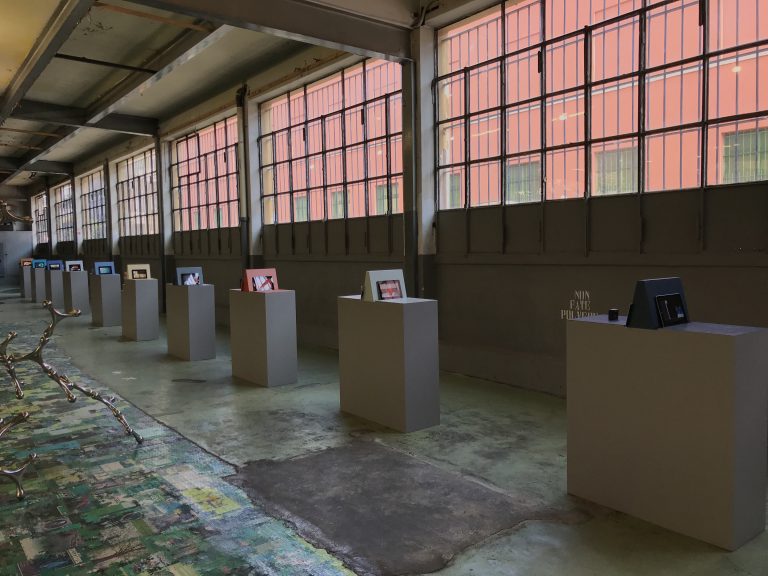 At the beginning of the lockdown in the UK, Pentagram’s partner Naresh Ramchandani and team had a virtual creative huddle. Their goal? To find joy in the indoors, and share it with the world.
Twitter poet Henry Ponder sprang to mind for his witty micro-musings that celebrate the little things. So the team scoured Henry’s back catalogue and found 10 poems that fitted the indoor joy bill.

To bring the poems to life, the team enlisted director Steven Qua and family for nine of the films – and roped in the Oscar-winning Kevin Macdonald for Stairs (Naresh lives nearby and always did envy his staircase). With help from other creative friends – including Harry Pearce, Yuri Suzuki, JeanGa Becker and Iain Grant – Home Poems were completed.
The optimistic snippets have gained over 150,000 views so far and the team (totalling at 19 people in 16 homes) hope the project spreads smiles far and wide.

Pentagram is a multi-disciplinary, independently-owned design studio. The works encompass graphics and identity, products and packaging, exhibitions and installations, websites and digital experiences, advertising and communications, sound and motion. The studio counts 25 partners in London and New York, all practicing designers working collaboratively or independently. It is the only major design studio where the owners of the business are the creators of the work. Naresh Ramchandani, producer and partner of the studio, worked and ran three independent advertising agencies before joining Pentagram. He founded environmental non-profit Do The Green Thing. Pentagram and Friends is the group of people – inside and outside the studio – participating in the realization of Home Poems.

In the first few days of lockdown, when outdoors felt dangerous, indoors felt strange and everyone was working out how to adapt, our first instinct was to help.

As a team, we had adjusted pretty quickly to being at home and working from home, but we were in touch with many others who were finding confinement harder. People who were sorely missing human contact, culture, space, exercise, newspapers, the rhythm of a commute – and subjects to talk about other than coronavirus. So we set ourselves a brief to create something that could help our friends, colleagues and creative community in these (as every email seemed to call them) “strange times”. Our first idea was to bring the outside world in. To create a newsletter for the creative community that researched, chose and linked to the best online concerts, shows, screenings, exhibitions, DJ sets, standups, games, competitions, challenges, fitness classes and courses you could enjoy within your four walls. A Time In, if you like. But our research into these happenings revealed many other publications that had exactly the same idea, were doing exactly the same thing, and could do it with far more knowledge and credibility than a six person team in a design studio.

So we changed our approach. Instead of enriching indoor life with an online helping of outside activity, could we help people find more interest and joy in their homes, the everyday objects they used there and the everyday things they did there? And that’s when we thought of Henry Ponder. Henry is a Twitter poet I’ve followed for a while whose landscape is everyday life and whose subject is the interest you can find there if you only stop to look. When we made a film about his poems five years ago, we followed Henry as he roamed the streets and parks of London and shared his poetic thoughts on puddles, footballers, snails, strangers and more. At the time we had largely focussed on his outdoor poetry, but did Henry’s gaze ever turn inwards? Could his unique perspective now enrich our indoor lives?

Excitedly, we scoured Henry’s Twitter-back-catalogue of over seven hundred poems and found exactly what we were looking for. Observations about the diversity of a hard-boiled egg, the heroic endurance of a stair, the willfulness of Sellotape, the kindness of spoons. Delightful observations that roamed through bedrooms, bathrooms, kitchens and sitting rooms, bringing a home alive with Henry’s light-hearted imagination. We long-listed around fifty poems, shortlisted fifteen and decided we would make ten into mini-films to post on Pentagram’s Instagram. We were now a week into lockdown, and without a clear sense of how long lockdown would be (at the time we guessed it may last up to six weeks – sigh), but with a strong sense that we needed to move quickly. First we messaged Henry and asked him if we could make some films about his poetry again. Just as he did five years ago, he wrote back to say it would make him very happy. He is such a kind soul.

Next we enlisted the help of director Steven Qua. Steven loved the idea of the films and threw himself into the project. Instead of spending time picking props and locations, Steven opted to start shooting straightaway, experimenting with the objects he had at home and shooting in places with good natural light. From these early tests, the films quickly found their look and feel. Our earlier Henry film was shot in black and white, featured some camera movement and majored on Henry as the subject. For these poems, we changed it up. We decided to go for vibrant colour to lift people’s spirits, use static shots to make a set of filmic postcards from around a home, and focus on the everyday objects that everyone could recognise and connect with. In fact we were thinking of leaving people out altogether, but both Sellotape and Crisp called for the involvement of a hand which Steven’s tests showed could be done naturally and unobtrusively. The hands were lent by Patricia, Steven’s partner, and Olive, their daughter (and Olive lent a hand in other ways too, acting as production assistant for the shoot). All this makes the filming sound easy, but in truth I’ve rarely seen everyday objects shot in a way that’s as natural and special as Steven achieved. From sunbeams streaming through window blinds to the hypnotic spectacle of milk mixing in slow motion with tea , Steven single-handedly made the films not just possible but absolutely beautiful. But there was one hitch: we really wanted to shoot a poem about a stair, and Steven’s place had a dark and chintzy staircase that he and Patricia hadn’t got round to decorating.

Instead of switching to another poem, we switched to another director – the Oscar-winning Kevin Macdonald, who happens to live down my road. I had been to Kevin’s house just a few days before lockdown and remembered having staircase envy. I called and asked him whether he had a film camera at home and whether he would shoot a lockdown poem for us. Rather wonderfully, two days later, he sent us the footage of his staircase, complete with the stair-climbing legs of his son Isaac. With everything filmed, we turned to the sound. We hadn’t planned for music because we thought a voice reading the poems would be enough. But then I recorded myself doing a (bad) read of Birds on my iPhone and placed it against Steven’s edit. When we watched it, we wondered if it sounded a little bit empty. Cue a few hours laying some different tracks against the edit on dear old Garageband, ending when I lucked upon a soft synth opening from a Sufjan Stevens song that sounded like a beam of morning sunshine. Inspired by this, we contacted two tremendous musicians, JeanGa Becker and Pentagram’s Yuri Suzuki. Within five days, they had created a suite of soft, happy hooks played on a variety of old synths in their homes. These pieces score each film with a real sense of warmth and lightness. While JeanGa and Yuri were making music, our go-to sound designer Iain Grant got to work, creating the sound effects and atmospheres that would make the poems sound convincingly domestic. Iain declared that – in the spirit of the project – he would avoid library sounds and record all the effects inside his home. And so he did, recording ticking clocks, clinking cutlery rattles, crisps being crunched, biscuit packets being opened, showers running and stairs creaking. When I observed that his stair creak was too subtle and suggested he resorted to a sound library, Iain refused (his exact words were “you’re killing me”) and found a more vehement stair creak outside a neighbour’s flat. The last part of the sound was the voice. Because Henry’s poems are a mixture of profoundly humorous and humorously profound, and the humour was an important part of alleviating the lockdown gloom, we toyed with the idea of asking a comedian to voice them. I even messaged Emily Oberman to see if she had any Saturday Night Live comedians in her pocket. Her reply was spot on. “Just use Henry, like last time. His voice is great.” And so Henry recorded the poems on a portable voice recorder in his home, adding character in the way that only Henry can – with the gentle, guileless warmth and humour he brings to his poetry.

We were done – almost. We hadn’t chosen a title for the series. Since the start of the project, we had built an ever-growing list of titles that included Within, The Great Indoors, Kitchen Contemplations, These Four Walls, Roommates, Writing From Home, Indoor Intermissions, Inside Lines and Home Brews. Our simplest title was Home Poems, which was straightforwardly descriptive with a nice near-rhyme. Our craziest title was its short form, Hoems. Once Steven had finished the films, and we could see how naturally joyful they were, we could also see that the simple dignity of Home Poems gave us the perfect name. We asked Harry Pearce whether he could set the title for us, and he and his designer Tom Walker got to work in their homes to design a beautiful piece of typography out of old Swiss spelling tiles. The idiosyncrasy of the letter spacing fitted the idiosyncrasy of the poetic observations perfectly. Then Steven created a lovely title animation that faded the letters on in alphabetical order, applied it to each film, and we were done.

Six weeks into lockdown, we posted a poem on Pentagram’s Instagram from Monday to Friday for two straight weeks. Starting with Birds and ending with Tea, we published the poems in alphabetical order, which I guess no one would have noticed, but which we enjoyed. With more than 150,000 views so far, we hope these Home Poems have managed to bring a little levity to a number of people in lockdown. Of course, we know this contribution is a minor one. It is the frontline and essential workers, the volunteers and the mutual aid groups who are continuing to see our communities through this global crisis with humanity, expertise and care. But that’s not to diminish an exceptional effort by 19 people working collaboratively across 16 homes to make ten very short films that were unusual, special, and in their own small way, helpful.

Henry Ponder
Poet & Voiceover. Minor poet who majors in finding the beauty and wonder in the everyday.