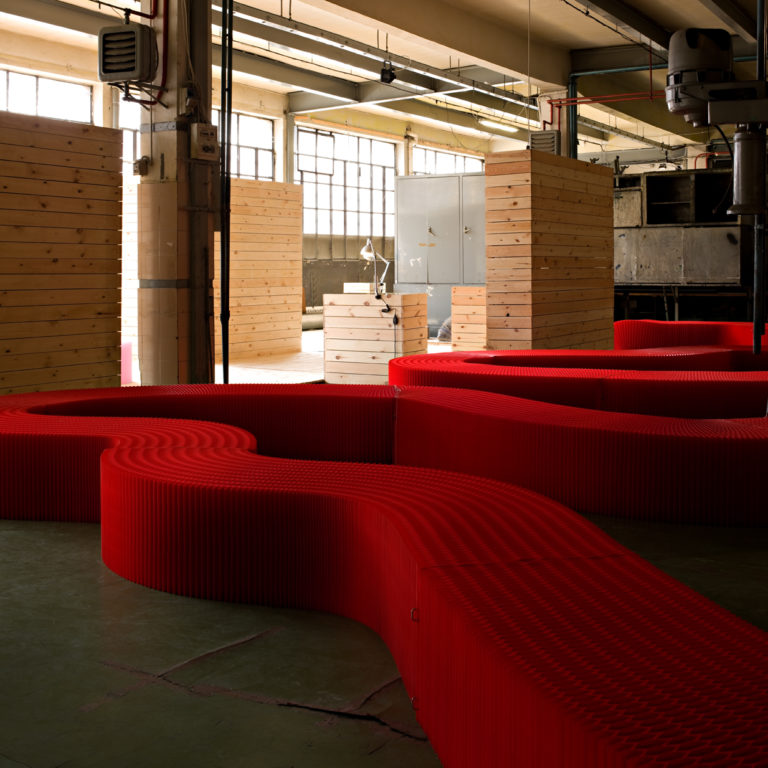 This exhibition will present all the work and research of Charles Kaisin from 1999 to 2009 linked to two themes: motion and recycling. Each subject will be generously presented by explaining the process of conception, the way of developing the objects and their production process. Numerous research models will accompany the work produced.

It’s in the kitchen with his mum that Charles Kaisin’s vocation revealed, watching materials mingling and transforming while making cakes with her.
Graduating with a Masters in Architecture (Institut Saint-Luc, Brussels), he studied design at RCA, London under the supervision of Ron Arad then at Japan’s Kyoto University. The Japanese experience shall make a lasting impression.
Since then, he has joined the growing circle of Belgian designers having gained a reputation outside Belgium’s borders. His work hinges on two fundamental notions: material stretching and recycling. His well-known K-Bench, with its honeycomb structure, broadly exemplifies the stretching notion which allows the material to acquire specific proprieties. Hence, the object is very easy to use and certainly original.
Ladies handbags, which were made in collaboration with fine leather luxury House Delvaux, follow the same idea. His Pocket bag remains totally flat when empty and when filled shapes into a welcoming pocket thanks to the use of extremely supple leather. As for the Basket model, it puffs up gorgeously as soon as you place an object into it, the alveolar structure allowing you to see what is hidden within.
Challenged, like many contemporary designers, with the issue of sustainable development, Charles Kaisin has indeed often integrated the notion of recycling notion into his work. His early Containers, were first examples. Created out of the glass doors of used washing machines: taken from industrial design, these translucent pieces go back to the ‘manufacturer’ to be turned into soft sandblasted dish-shapes. Similarly so for the tumbler «glasses» made out of used bottles via a similar process.
The Pingolingo bag is another example of his will to work towards a better and cleaner design. For his containers and glasses he merely re-used existing materials. This time he has created a new material out of simple plastic pockets. After collecting, cutting and randomly superimposing the layers, thanks to a process mixing pressure and heat, he creates a new raw material.
The final look of his creations convey an indirect message: consume less! Indeed, it seems obvious through the logos and brands sometimes visible in watermark, Kaisin takes a swipe at our consuming society. This may seem paradoxical for someone whose Industry is dedicated to convincing us to constantly update ourselves.
Passionate about contemporary art, Charles Kaisin continues to work on the development of more experimental projects such as the Hairy chair which was shown at the Design contre Design exhibition at the Grand Palais, Paris, in 2007. His fine touch could be regarded as a witty mix of strictness, eccentricity, aesthetics and passion.
Besides his designer activity, he has also planned a number of interior designs, as was the case with the Musée du Louvre or more recently with the Grand-Hornu.
Charles Kaisin is first of all a generous mind from Belgian design. Open to the world and to people, he likes quoting Paul Eluard: «Il n’y a pas de hasard, il n’y a que des rendez-vous» in other words, chance does not exist, only appointments are made.