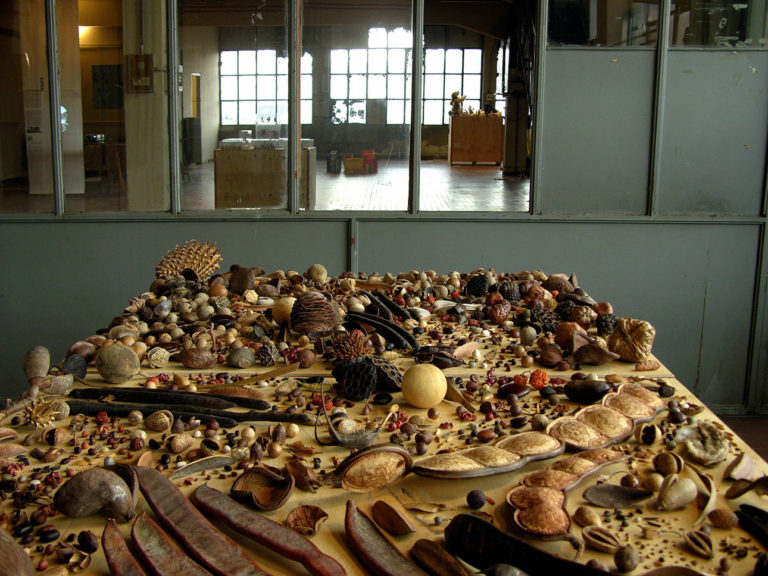 Groups of objects, small samples of big collections, works by contemporary artists that examine how the acts of recognizing, acquiring and arranging things are already, in themselves, creative gestures, necessary and complementary to artistic production. Collecting as a forma mentis, a particular attitude of coexisting with objects that takes the form of gathering, caring for and conscious use of all that nourishes individual imagination. An eccentric collection of collections dwells for one month in the spaces of Assab One, a temporary, never completed Wunderkammer, in a constant state of becoming, open to new contributions throughout the duration of the show.

On display are groups of objects, small samplings of large collections, works by contemporary artists that speak of how the acts of recognizing, appropriating and giving a place to things are in themselves creative gestures, necessary and complementary to artistic achievement. Collecting as a forma mentis, as a particular attitude of being with objects that manifests itself in collecting, caring for and consciously enjoying what nourishes one’s imagination.
The exhibition takes its cue from the book “Collecting or the World as Voluptuousness and Simulation” a+mbookstore editions/permanent studio, curated by Elio Grazioli, with contributions by Amedeo Martegani, Maurizio Nannucci, Luca Pancrazzi, Tullio Leggeri and other artists and collectors, whose roles are confused and confronted in the shared mode of keeping company with objects. An eccentric collection of collections dwells for a month at Assab One, a temporary and never-ending Wunderkammer, constantly being set up and open to new contributions for the duration of the exhibition, because each collection, each object, each work, hides and evokes another, in a chain of cross-references with inexhaustible generative potential.

“(…) the collection is first of all a way of collecting and holding together, a different form and logic (… ) Forms and logics different above all from the most widespread ones, the social ones, the so-called, or self-styled, “winning” ones; forms and logics of quality, of desire and realization, rather than of will and representation, of fiction and consensus; internal and individual forms and logics, apparently bordering on the arbitrary and expressionist, but which, like the work of art, demonstrate their own statute of law, of functioning first and of real validity later, which produce beauty and safeguard the need and shareable value (. ..)”.  Elio Grazioli

There are people who have an eagerness to collect objects, in quantities often very large, sometimes even excessive for their own possibilities. These are objects linked together by some more or less obvious or secret relationship, which these people like to keep around and enjoy as soon as they have the time. They build for themselves a world apart, regulated by their own pleasure, composed of what makes them feel good, as real as the external real. They also make what they feel is their own work, a kind of super-work made of things made by others, but chosen and charged with additional meaning.
They are often oddballs. You can recognize them immediately when you meet them, in any situation, even just in conversation, especially if you touch on a subject that concerns them. They alter, they transform in the presence of what they are looking for, they become capable of behaviors far removed from their usual habits. They are the collectors and have long attracted the attention of psychologists, anthropologists, scholars of various kinds and writers of all kinds.

There is a vast literature on them, describing them in a variety of ways, from almost comic caricature to dramatic characterization. Collecting has no limits; one collects everything. There are those who would like to have everything of a certain type or subject and those who collect according to their own criteria-an idea, voluptuousness, simulation-disparate objects to the point of improbability.
There is a history of their evolution, for each era has had its collectors: the sixteenth-century Mannerist collector was different from the seventeenth-century Baroque collector, the Wunderkammern constituted a fashion, the nineteenth century had industrial collecting, the twentieth century had manic collecting, modernist collecting, monopolistic collecting, and archival collecting.
To name a few famous names in art collecting, Gertrude Stein was different from Peggy Guggenheim as well as Paul Getty…. And who knows if they had another collection that was more personal, more intimate, than the one they displayed publicly, representative.

Let us come, then, to art. The fact is that lately there has been a lot of talk, debate, and writing about collecting, but almost exclusively from a financial, investment, calculation, status symbol and similar point of view. Conversely, and at the same time, artists themselves have increasingly begun to exhibit certain of their personal collections as their works, or to conceive of their own works as collections, each understanding the matter differently, of course: collecting has thus become a metaphor, a figure of art itself and of culture, of the way of understanding this changed world. No more systems, linear evolution, grand metaphysics…. What then? The network? The archive? No, the collection. The collection as a way of holding things, ideas, affects, behaviors together, of relating them and making them mean something. A more concrete, from within, human-sized way of being well in the world. Not a model, not how one would like the rest to be as well, but how one can truly be around oneself. A constructive, ever-changing way, a kind of anagram of the world, whose pieces compose different sequences from time to time, the latest arrivals add other possibilities, and whose meaning can be read in the watermark, transversely to the meaning of the objects that compose it, according to a different logic, not linear, but of the relations of the parts among themselves. Collecting eludes theories; it arises from a felt need; it does not compromise on its own fulfillment.

We collect everything, we were saying, precisely. So what did we do? A year ago we put together a book, in which we exposed this way of understanding collecting, reconstructed in summary its recent history and the questions it has posed to art, collected testimonies (Gilbert and George, Fischli and Weiss) and invited artists to present special “collections” projects, in their own way (Stefano Arienti, Giulio Lacchini, Luca Pancrazzi). Among art collectors we interviewed some who have performed special collecting feats: purchased entire exhibitions-events that cannot be dismembered (Tullio Leggeri), or actively participated in the art they purchased (Corrado Levi), or collected the “ephemera” of art (Maurizio Nannucci), for example. Non-art collectors actually are hard to find who talk openly about how they understand the meaning of their collecting; we then hosted texts by scholars-also special, “collectors” in our general sense-about strange collections, ranging then from anvils (Manlio Brusatin) to details of paintings (Antonella Anedda) to… to ideas, to the intangible (Gianluigi Ricuperati).

Today, at Assab One, we are staging a collection of collections, starting with that book, but with so much more: excerpts from collections most of which do not have to do with art, saints and madonnas, colorful textiles, plants, seeds and pods, fetishes, Japanese surprises that recatalogize the world and fashion. Taking advantage of the exhibition space and form, we mix them with parts of art collections and works by contemporary artists who have made the collection their theme or form, or whom we have invited to engage with our understanding of it. Thus we range from Joseph Cornell, a sort of tutelary deity of our initiative, to Stefano Arienti, Sophie Calle, Vincenzo Cabiati, Mario Dellavedova, Silvie Fleury, Louise Lawler, Armin Linke, Amedeo Martegani, Maurizio Nannucci, Luca Pancrazzi, Luca Scarabelli, Alessandra Spranzi, Studio Permanente, Luca Vitone, Warburghiana.

We are counting on the “strangeness” of the coexistence of all this, on the inconsuetude of the exhibition and setting up to restore and concretize the sense of this way of understanding collecting, its lively and open side above all; but also its necessity and widespread radicality, more deeply rooted than we usually think, submerged by other interests and behaviors, urgent perhaps to consider things differently.