A solo exhibition by Velasco Vitali

A solo exhibition by Velasco Vitali

OPENING TIMES
From October 16 to November 29

Wednesday to Saturday from 3:00 pm to 7:00 pm, reservation is highly recommended (info@assab-one.org)

Velasco Vitali’s solo show GOLDWATCH launches the new “Studio 3” space with a series of paintings realized during the lockdown, when the artist portrayed a different view of his garden everyday. 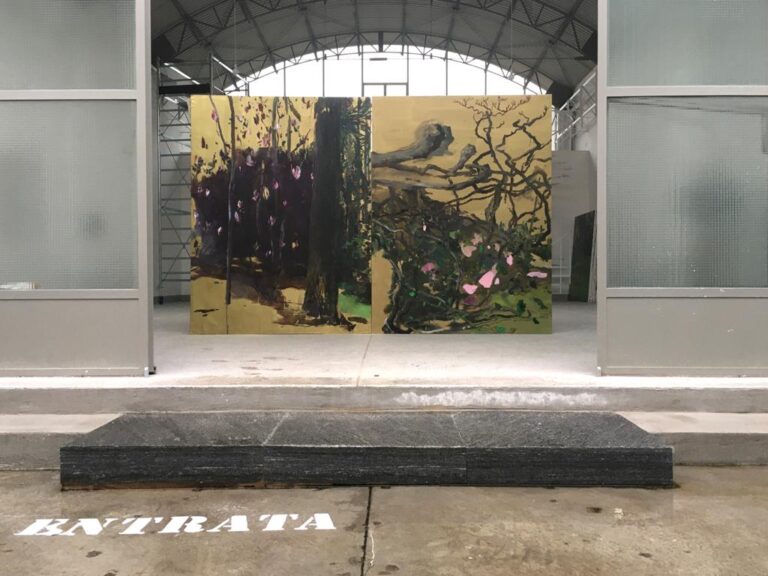 GOLDWATCH is the narration of a peculiar period of physical isolation that unfolded in a series of images depicted within the walls of a garden adjacent to the artist’s studio. The process is a metaphor for a moment in which the hours were all the same and, like the space, have acquired new dimension. Compelled to the new intimacy both time and space had to be measured in somehow different units.

The walls form a shape of a square, which reminded the artist of a clock dial, hence he decided to divide the space in 24 fractions. He then portrayed them daily en plain air, whilst nature recklessly bloomed into spring, ignoring the world that came to a standstill.

The name of the project–GOLDWATCH–has been taken from a memorable scene of Quentin Tarantino’s movie Pulp Fiction. It sums up the building elements of the narration of the project: the square dial of the garden, the relentless passing of hours, the changing of the seasons, gold’s abstract separation of background and a symbolic value of inheritance, received only to be passed on.  The works  are of the same dimensions. On the 24 larger works the  landscape is painted on a golden background, as a reference to spiritual and limitless dimension of space from Medieval gold-ground art. It’s the artist’s way of reflecting on the imposed necessity to make a new beginning.

The result of the process that led to the exhibition is divided into three cycles, each consisting of 72 works. The first 24 days were broadcasted live via the artist’s Instagram profile (@velascovitali), while he talked with various friends.

Velasco Vitali was born in Bellano in 1960. He lives and works in Milan.  His career began with the encounter with Giovanni Testori and participation in the exhibition Artisti e Scrittori at Rotonda della Besana in Milan.

After several solo shows, his painting concentrated on the tragedy that destroyed part of Valtellina at the end of the 1980s, work that converged in the exhibition Paesaggio Cancellato curated by Roberto Tassi (1990).

At the end of the 1990s he was invited to the Rome Quadriennale, and began research on the ports of the Mediterranean and southern Italy: this focus led to Isolitudine with Ferdinando Scianna in 2000, and in 2003 MIXtura with Franco Battiato.

In 2004 Electa published Velasco 20, on monograph on the artist’s first twenty years of work, with a contribution by Giulio Giorello. Extramoenia (2004-2005) was an exhibition organized by the Region of Sicily, held in Palermo (Palazzo Belmonte Riso) and Milan (Palazzo della Ragione).

In 2005 his work became part of the collection of the MACRO in Rome. With curator Danilo Eccher, he produced the exhibitions Immagini, forme e natura delle Alpi (2007) and LATO4 (2008). Fernando Mazzocca and Francesco Poli curated Sbarco (2010), set up in Piazza Duomo and in the complex of Sant’Agostino at Pietrasanta, and in Milan at Piazza Duca d’Aosta and Palazzo Reale.

In 2011 he was invited to participate at the Italian Pavilion of the Venice Biennale, showing Veidrodis; the LKFF Gallery in Brussels hosted his solo show Branco, and the volume Apriti Cielo was published by Skira, featuring watercolors on the theme of the sacred, including some of the drawings made for the culture section of “Il Corriere della Sera,” the newspaper with which he has worked since 2007.

In 2012 he did Foresta Rossa, an art intervention on Isola Madre (Stresa) and in Verbania, curated by Luca Molinari. The reflection on the ghost town that formed the basis of this installation continued the next year with the solo painting exhibition Foresta Rossa: 416 città fantasma nel mondo at Triennale di Milano, curated by Luca Molinari and Francesco Clerici. That same year a solo show of sculpture was produced at LKFF in Brussels, the installation of Branco, a group of sculptures at the Vittoriale degli Italiani -curated by Flavio Arensi-, and the monumental project Medi Terraneo at Castello Ruffo di Scilla.

On 14 April 2014 he showed the sculpture Traditio Symboli in the Cathedral of Milan and took part in the IV Biennale Gherdeina of sculpture in Ortisei, Val Gardena.

In February 2015 he was invited to the Berlinale (FIPRESCI award winner) as producer and protagonist of the documentary Il Gesto Delle Mani (directed by Francesco Clerici) which shows the making of his bronze dog sculpture. 2015 is the year of his solo show “Fuga” (curated by Mark Gisbourne and Giacinto di Pietrantonio) in Emilio Mazzoli Gallery in Modena.

In 2017 he curates and designs (with the collaboration of Peter Greenaway) the exhibition of his father Giancarlo Vitali “Time Out” at Palazzo Reale, Sforesco Castle, Museum of Natural History and Casa del Manzoni (Milan).

2019 sees his exhibition “Veduta”, curated by Danilo Eccher, at the M77 Gallery in Milan.